US names 3 men in Brazil as al-Qaeda affiliates

Three men in Brazil have been sanctioned for their suspected al-Qaeda affiliations and for supporting the terrorist group, the US Treasury Department’s Office of Foreign Assets Control said on Wednesday.

At least one has been linked to a man wanted by the FBI for his role in attacks on the United States dating back to 2013.

The Treasury Department said the action was aimed at international funding for Al-Qaida.

He said all property and interest in the property of the three people and any entities they own in the United States or that are in the possession or control of U.S. residents must be blocked and reported to the Treasury.

Mohamed Ahmed Elsayed Ahmed Ibrahim has been wanted by the FBI since 2019 for having been an al-Qaeda agent and planning attacks against the United States since 2013. On Wednesday, the US Treasury Department sanctioned three men in Brazil for having been linked to the terrorist network, including an individual with links to Ahmed Ibrahim

One of the men has been identified as Mohamed Sherif Mohamed Awadd, who the Treasury Department said arrived in Brazil in 2018 and received wire transfers from other al-Qaida associates in the country.

Awadd, who holds dual Egyptian-Syrian citizenship, owns a furniture store in Guarulhos, a city in the Sao Paulo metropolitan region, the statement said.

The statement alleged that Awadd and Ahmad Al-Khatib, the owner of another furniture store in Guarulhos, had provided technological or financial support to the terrorist group.

Al-Khatib, who holds dual Egyptian-Lebanese nationality, is accused of providing “financial, material or technological support, goods or services to or in support of” Mohamed Ahmed Elsayed Ahmed Ibrahim.

The FBI searched for Ahmed Ibrahim for being an agent of the militant terrorist organization and for planning attacks on the United States as early as 2013. 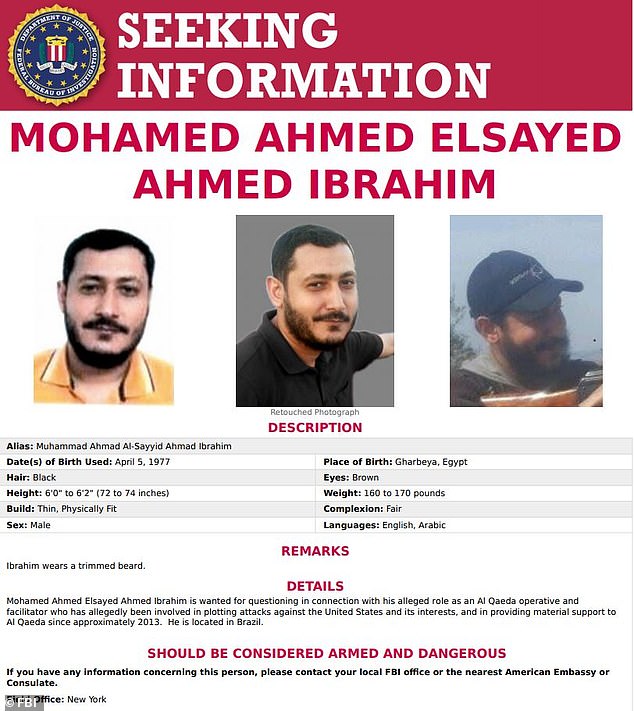 The Treasury linked Awadd and Al-Khatib to Ahmad Al-Maghrabi, who it says arrived in Brazil in 2015 and became Al-Qaeda’s first contact in the country. He gave no further details about Maghrabi’s residence or livelihoods and did not report anything about alleged collusion between him and the other two.

“The activities of this Brazil-based network demonstrate that al-Qaida remains a pervasive global terrorist threat, and today’s designations will help deny the group access to the formal financial system,” the undersecretary said. to Treasury Brian E. Nelson in the press release.

Attempts by the Associated Press to reach Awadd and Al-Khatib by telephone were unsuccessful.

Since the terrorist attack of September 11, the US government has imposed financial sanctions on various countries seeking to limit the funding of terrorist groups. Around 300 citizens allegedly affiliated with al-Qaida and other extremist groups have been targeted.

The terrorism designation announced on Wednesday was the third US action involving Brazil in the past week.

Brazilian authorities and the United States immigration and customs services announced that four people were arrested last Thursday for their alleged involvement in online threats, hate crimes and the planning of events causing many victims.

The people belonged to neo-Nazi cells that planned attacks on public places, such as schools, as well as hate crimes against Jewish and black civilians, US officials said in a statement. One of the perpetrators confessed that he was planning to bomb a New Year’s celebration in the state of Sao Paulo, the statement said.

Brazil has had an anti-terrorism law since 2016, passed before the Olympic Games held in Rio de Janeiro that year. Days before the opening ceremony, the country’s federal police arrested 10 people believed to be from a cell that had pledged allegiance to the extremist Islamic State group.

6 Important Services To Look For From ...